In a muted show of defiance near Ethiopia’s capital city, a tall farmer glanced around before furtively crossing his arms below his waist to make the Oromo people’s resistance symbol.

Ethiopia’s government outlawed the gesture made famous by Olympic men’s marathon silver medalist Feyisa Lilesa – who formed the “X” above his head at last year’s Rio games – when it enacted a draconian state of emergency in October in an attempt to stem 11 months of protests. Although that decree has suppressed unrest, the farmer thinks demonstrations will start anew.

“The solution is the government has to come with true democracy. The people are waiting until the state of emergency is over and then people are ready to begin to protest,” he said.

While the emergency has led to at least 25,000 people being detained, security forces aren’t visible on roads flanked by fields with workers wielding curved sickles to harvest crops. Beyond that seeming normality, there is pervasive discontent with authorities accused of responding to claims of ethnic marginalisation byintensifying repression. 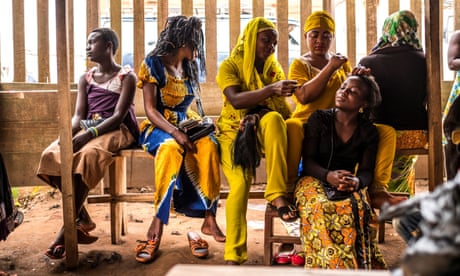 “The protests will come again because the government is not responding to the demands of the people in the right way,” said another young Oromo man in Ejere town. Like others, he answered via a translator in the Oromo language, and asked for his views to be kept anonymous.

Farmers in the restive West Shewa district of Oromia dismissed the political response so far, which has amounted to replacing regional leaders. Despite positive noises from the new Oromia president, many seek a wholesale change of government. “People need new faces and a new system,” the Ejere man said.

The problem for activists is how to translate popular anger stemming from grievances into political change. The security apparatus has shown it can quell protests and a de facto one-party state offers few opportunities for opposition activities.

Longstanding complaints by the Oromo about state exploitation coalesced around opposition to a metropolitan development plan in November 2015. In January the government suspended the blueprint for the integrated development of Addis Ababa with surrounding Oromo areas, but that didn’t stem the revolt. Some demonstrations were peaceful; others involved torching investments and government offices. Security forces gunned down as many as 600 protesters, according to the Association for Human Rights in Ethiopia.

Now the demands are less policy-oriented due to outrage over repression. Allegations of ethnic bias are prevalent, though it is Oromo officials who are culpable for local failings. The claims centre on a view that the Tigrayan ethnic group benefit disproportionately from a system said to be controlled by the Tigrayan People’s Liberation Front (TPLF), which founded a coalition that has ruled the country since 1991. Activists, many of whom are based abroad, also allege that Ethiopia’s territorial expansion in the late 19th century dispossessed Oromo, who at roughly 35 million people-strong nonetheless remain Ethiopia’s largest community.

Under a multinational federal system introduced in 1995, the Oromo group runs its own region, but people complain the resource-rich state is economically exploited, and their leaders subservient to the TPLF in the Ethiopian People’s Revolutionary Democratic Front (EPRDF). “There’s an Oromo saying: what the husband says, the wife cannot change,” said another opponent apropos of the political dynamic.

Land, which is state-owned in Ethiopia, is a particularly emotive issue. An aggressive, government-driven approach to development, combined with corrupt officials and investors, led to Oromo familieslosing farmland without receiving adequate compensation over the past two decades, particularly on the sought-after fringes of the capital.

Around Guder town, 80 miles (130km) west of Addis Ababa, farmers believe Oromo officials enriched themselves by selling plots on the edge of town to developers and using the proceeds to build houses near the capital. One man interviewed can’t give a specific example of an unfair eviction near Guder, but he’s worried about the trend. “People have a fear about what happened in the Addis Ababa area,” he said.

Other common concerns are mundane, and acknowledged as legitimate by officials: people want an improved road, or better supplies of water and electricity. Despite evident progress, Ethiopia, where the population of close to 100 million is Africa’s second largest, still lies 174th out of 188 countries on the UN’s 2015 human development index, below South Sudan and Afghanistan.

The evolving and multi-layered grievances are an acute test for the government, as well as a conundrum for major donors, such as the UK’s Department for International Development, which remains silent on the EPRDF’s repression as it lauds its development record. While efforts to improve public services, create jobs and reduce corruption may make headway, there’s little chance of the desired systemic reform.

That was reinforced by the arrest in November of Merera Gudina, the most high-profile Oromo opposition leader not in jail or abroad. He was accused of breaking emergency rules by communicating with a banned nationalist opposition leader at a European parliament hearing in Brussels.

Across West Shewa, locals said there had not yet been any changes in community leaders and the government hadn’t reached out to discuss the problems with them. Some said they were no longer interested in what officials had to say.

Despite this gulf between officials and public, serious dialogue is unlikely, according to Zelalem Kibret, an Ethiopian blogger who was arrested in 2014 and is currently a visiting scholar at the Center for Human Rights and Global Justice at New York University.

“The government will not go for any type of concession while the opposing force is weak. The activists also seem unwilling, since they are aimed at ousting the regime. I think the brutality that was unleashed by the regime for the last 12 months pushed every moderate voice to the fringe,” he said

If the movement were to opt for incremental gains through the ballot box, opposition parties would have to compete in local elections scheduled for 2018, but that presents formidable political and logistical obstacles. As well as holding all seats in the federal parliament and regional chambers, the four-party EPRDF and allied organisations occupy all of up to 100 seatson each one of more than 18,000 village councils, and also on roughly 750 larger administrations, said Zelalem. With opposition leaders and activists exiled, imprisoned, or fearing arrest, already weak parties are in no shape to loosen the coalition’s hold.

“The EPRDF is still the only strong political force in Ethiopia. I doubt the protesters have any solid bargaining power other than sporadic demonstrations that are likely to be quashed easily. It is an impasse. Most probably the regime will stay in power for many years,” Zelalem said.