NAIROBI, Kenya – A cursory glance at the headlines shows that Ethiopia has one of Africa’s fastest growing economies. But the noise generated by the hyperbolic international media is drowning out the critical voices.

Political opposition is being strangled by the authorities as activists and journalists are arrested and thrown into jail at a dizzying pace.

On April 25 of this year, the Ethiopian government made news by arresting six bloggers and three freelance journalists. Setting a dangerous precedent for other governments in the region and beyond, authorities are now targeting youth online.

The nine writers are facing terrorism-related charges, standing accused of inciting violence through social media. The six bloggers are members of the online collective known as Zone 9. The moniker was chosen to represent the inalienable right to freedom of expression: journalists are often held in the section of Addis Ababa’s Kality prison known as Zone 8.

“The government claims [those detained] are conspiring with foreign non-governmental organizations, human rights groups,” said journalist Araya Getachew. “It also claims that they are also working for banned terrorist organizations trying to overthrow the state. This is totally false.”

Araya Getachew, 29, along with Mastewal Birhanu, 27, and Fasil Girma, 29, all sought refuge in Kenya following a state crackdown on media in Ethiopia. Some veteran journalists were not so fortunate: Woubshet Taye, Eskinder Nega and Reeyot Alemu have all been recently sentenced under a new media law.

Human Rights Watch is monitoring the situation. HRW stated: “Since Ethiopia’s anti-terrorism law was adopted in 2009, the independent media have been decimated by politically motivated prosecutions under the law. The government has systematically thwarted attempts by journalists to establish new publications.”

Critical blogs and websites are regularly blocked, says HRW. In 2012, even publishers which printed publications that criticized authorities ended up being shut down.

Mastewal was arrested last year alongside his editor for printing editions of the newspaper Feteh. The reason the authorities gave for shutting down the newspaper and arresting Mastewal and his editor was that they published news of the death of former Prime Minister Meles Zenawi before an official government announcement was made.

“The government confiscated and burned all 40,000 copies of the newspaper,” Mastewal says. “I was put in jail and charged. I refused to plea bargain to help convict my editor. I left the country.”

“For me,” says Araya, “there’s no doubt if I were in Ethiopia that I would have been arrested by now. Most bloggers and freelancers there are my friends.”

All three Ethiopian journalists now live in Nairobi, Kenya’s capital. Unlike most Ethiopian emigrants in Kenya, they are political, not economic, refugees.

Mastewal and Araya applied at the UN High Commission for Refugees, or UNHCR, to be resettled in Canada. They still await a response from the Canadian High Commission.

“We made our claim together with UNHCR,” Araya said. “We have file numbers but nobody to call, no contact person at the high commission. They still have not told us when we’ll be leaving for Canada.”

Fasil founded a public forum in Ethiopia for journalists to discuss issues of corruption in government. Not long afterwards, he was all but chased out of the country.

“I left Ethiopia two years ago,” he says. “I was doing research with Transparency International. We sent an anti-corruption report to the Ethiopian government for feedback and then the pressure became so intense that I had to leave.”

The Ethiopian and Kenyan governments have recently started working together to combat the spread of terrorism across the region. This cooperation is making Nairobi-based Ethiopian journalists feel uneasy about speaking or writing freely.

“With the Kenyan security forces rounding up refugees,” says Fasil. “I fear deportation. It’s tough to go out and come back safely.”

It is now over 100 days, and counting, since the six Zone 9 bloggers and the three freelance journalists were thrown into Ethiopian prison cells. For Fasil, like most political refugees, life in Kenya is tough. But, unlike Araya and Mastewal, he is not yet ready to give up and head to Canada.

The quiet dismissal of some 10 percent of the station’s journalists underscores the country’s further descent into total media blackout – See more at: http://www.cjr.org/behind_the_news/ethiopia_cans_18_journalists.php#sthash.kNMFSHD3.dpuf

On June 25, when 18 journalists from Ethiopia’s state-run Oromia Radio and Television Organization (ORTO) arrived to start their scheduled shifts, they learned their employment had been terminated “with orders from the higher ups.”

The quiet dismissal of some 10 percent of the station’s journalists underscores the country’s further descent into total media blackout. The firing of dissenting journalists is hardly surprising; the ruling party controls almost all television and radio stations in the country. Most diaspora-based critical blogs and websites are blocked. Dubbed one of the enemies of the press, Ethiopia currently imprisons at least 17 journalists and bloggers. On April 26, only days before US Secretary of State John Kerry’s visit to the capital, Addis Ababa, authorities arrested six bloggers and three journalists on charges of working with foreign rights groups and plotting to incite violence using social media.

Reports on the immediate cause of the latest purge itself are mixed. But several activist blogs noted that a handful of the dismissed journalists have been irate over the government’s decision not to cover the recent Oromo student protests. An Ethiopia-based journalist, who asked not to be named due to fear of repercussions, said the 18 reporters were let go after weeks of an indoctrination campaign in the name of “gimgama” (reevaluation) failed to quiet the journalists. The campaign began earlier this month when a meeting was called in Adama, where ORTO is headquartered, to “reindoctrinate” the journalists there into what is sometimes mockingly called “developmental journalism,” which tows government lines on politics and human rights. The journalists reportedly voiced grievances about decisions to ignore widespread civic upheavals while devoting much of the network’s coverage to stories about lackluster state development.

Still, although unprecedented, the biggest tragedy is not the termination of these journalists’ positions. Ethiopia already jails more journalists than any other African nation except neighboring Eritrea. The real tragedy is that the Oromo, Ethiopia’s single largest constituency (nearly half of Ethiopia’s 92 million people) lack a single independent media outlet on any platform.

The reports of the firings come on the heels of months of anti-government protests by students around the country’s largest state, Oromia. Starting in mid-April, students at various colleges around the country took to the streets to protest what they saw as unconstitutional encroachment by federal authorities on the sovereignty of the state of Oromia, which according to a proposed plan would annex a large chunk of its territory to the federal capital—which is also supposed to double as Oromia’s capital. Authorities fear that an increasingly assertive Oromo nationalism is threatening to spin out of state control, and see journalists as the spear of a generation coming of age since the current Ethiopian regime came to power in 1991.

To the surprise of many, the first reports of opposition to the city’s plan came from ORTO’s flagship television network, the TV Oromiyaa (TVO).

A week before the protests began, in a rare sign of dissent, journalist Bira Legesse, one of those fired this week, ran a short segment where party members criticized the so-called Addis Ababa master plan. Authorities saw the coverage as a tacit approval for public displeasure with the plan and, therefore, an indirect rebuke of the hastily put-together campaign to sell the merits of the master plan to an already skeptical audience. But once the protests began, culminating in the killings of more than a dozen students in clashes with the police and the detentions and maimings of hundreds of protesters, TVO went mute, aside from reading out approved police bulletins. This did not sit well with the journalists, leading to the indoctrination campaign which, according to one participant, ended without any resolution.

In the last decade, the country’s economic improvements have become something of a cliche in the West. In March, Time Beijing correspondent Michael Schuman included Ethiopia in his new development acronym, PINEs—the NextGen emerging markets, namely the Philippines, Indonesia, Nigeria, and Ethiopia. Schuman called Ethiopia “one of Africa’s lion economies,” along with Nigeria.

Ethiopia’s state-controlled media touts the country’s “radical” economic transformation ad nauseum. In analysis after analysis, Western journalists and donors such as the World Bank Group and the International Monetary Fund refer to the country as “one of the fastest growing non-oil economies” in Africa.

Mohammed Ademo is a journalist at Al Jazeera America. He’s also the founder and editor of OPride.com, an independent news website about Ethiopia. He can be reached on Twitter @OPride.

Reporters Without Borders has learnt today that the court in Addis Ababa granted the police investigating the case against the 6 bloggers and three journalists, 28 more days for further investigations. The police notably claimed they were unable to access the Facebook and Twitter accounts of the detainees, which were reportedly disabled after the hearing on May 7th and 8th. 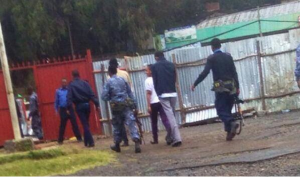 According to the Eastern Africa Journalists Association ’s Secretary general, Alexis Niyungeko. “The request by the police for more time to conduct further investigations clearly shows that the three journalists and six bloggers were arrested without sufficient evidence”.

Following today’s hearing, the news providers are now being officially charged under thecountry’s infamous anti-terrorism proclamation of 2009, which can carry imprisonments sentences from 5 to 10 years.

During today’s hearing, a witness said that Zone9 blog member Atinaf Berhanecomplained of sever torture and interrogation throughout the night. The detainees were able to see their lawyers for the first time on May 14th and May 16th, according the defense lawyer Amha Mekonnen. The next hearing is scheduled for June 14th.